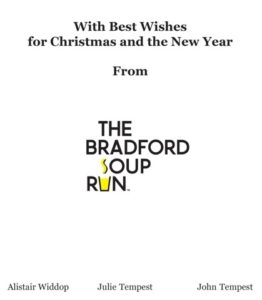 We wouldn’t normally use our Christmas card for anything other than a rather good image and thought-provoking message, but as so many have shown support and asked about progress, we thought again.

We were hoping to show an image of our new Pavilion, complete with everything we need to feed Bradford’s homeless. Sadly, you’ll just have to use your imagination. Here’s why:

When you’ve seen someone drinking soup outside, and losing the battle to drain the cup before the rain fills it again, you can see how important we think it is that people can sit at tables in the warmth and be served a nourishing meal – without worrying about the rain, snow and cold wind. Pretty much how we would expect to eat a meal.

Unfortunately, not everyone at Bradford Council feels the same…

For over a year we’ve had meetings with middle management at the council. We’ve kept them fully appraised of meetings with suppliers, informed them at every stage of the progress made to date, listened to their opinions and been open and compliant with their requests for information over costing etc. We’ve also had meetings with the Council Leader, Cllr Dave Green*, who did seem supportive of our needs for those we meet on our Soup Runs. It’s been a busy year, but it’s now got a bit embarrassing.

The council officers we’d met are now saying that more senior officers haven’t yet decided to do anything; that the bulldozers will be soon knocking down the Wetherby Engineering building [opposite where we are]; and we mustn’t receive ‘betterment’ [that means we shouldn’t seek to get a better unit than the one we already have] as a result of their kicking us off our site to build a swimming pool – as if the new pool will be built like the old municipal baths of some 30 years ago! Remember, we didn’t ask to move: we were told we’d have to. And it was even more embarrassing that we only found out about this via the Telegraph & Argus. The Council said they didn’t know how to get in touch with us [most people can find us without too much difficulty]; also, they didn’t know who our landlords are – it’s Bradford Council!

Briefly, moving our existing unit is not an option – it’s been open to the elements for about 20 years and, if moved, the door and windows will not work without extensive repairs. Moving it would classify it as a ‘new build’ which means a fire door, electric lighting, disabled access and insulation above and below the floor and ceiling [anyone taller than 5’10” would have to crouch down]. When added up, this work would amount to tens of thousands of pounds – and all to provide a unit which is not fit for purpose…

So, we made plans for a larger unit which would enable everyone we meet to sit inside in the warmth whilst they ate. We’re currently providing for 100, yet only 43 can be seated and our numbers have grown in the past year [and show signs of increasing].

“Oh, but we must be careful with the use of Council monies” the Council said. And quite right, too. What a shame they didn’t think of that before they gave the directors of Wetherby Engineering £1,000,000 for their building.

At least it will provide a talking point when you next meet someone from the Council. Feel free to ask them to tell you about their concern for Bradford’s homeless…

* We did ask Cllr Green how much Bradford Council had given in grants to voluntary groups in the past 31 years – £60-90,000,000. We then asked him how much The Bradford Soup Run had ever requested. We saved him the time: Nothing.

Here’s the PDF of the Christmas card:

This message is only visible to admins.
Problem displaying Facebook posts. Backup cache in use.
Click to show error
Error: Error validating access token: The session has been invalidated because the user changed their password or Facebook has changed the session for security reasons. Type: OAuthException

Bradford-based Morrisons has donated hundreds of Easter Eggs to the Bradford Soup Run to spread some cheer.Wayne Frost, manager at the Girlington branch, said: “We are very aware that life isn’t easy for everybody and many people are finding things difficult.“Once again, we are delighted to support a local charity which cares for those who are most vulnerable.”James Braid, a volunteer with the Bradford Soup Run, added: “These chocolate eggs will be a nice supplement to our already-nutritious meals and we know they’ll be well received by those we meet on our soup runs.” ...

A LEADING Bradford charity official has praised the decision to prioritise homeless people and those sleeping rough for vaccines after applying pressure to the Government.Health Secretary Matt Hancock accepted a recommendation last week to offer jabs to those living on the streets alongside people in priority group six.It came after the Joint Committee of Vaccination and Immunisation (JCVI) advised that people who were homeless or sleeping rough were likely to have underlying health conditions.The priority group six includes adults aged 16 to 65 years who are in an at-risk group.The Government's website lists a number of clinical conditions that fall into this category, including diabetes, blood cancer and heart problems.Mr Hancock said accepting the advice from the JCVI would “save more lives among those most at risk in society."The Bradford Soup Run - a charity that has fed the city's homeless for the last 37 years - was one of those that helped put significant pressure on the Government for this move to be made.There was a confusing paradox when the charity's volunteers were vaccinated in January because they were considered to be at risk as "front-line workers", but those they were helping were not.John Tempest, Director of The Bradford Soup Run, said: "My team of volunteers and I were vaccinated in January as we were considered to be at risk as ‘front-line workers’."However, we were concerned that those we feed on our Soup Runs were not given the same consideration."The charity began making enquiries as to how this could be changed, moving down different avenues to ensure something happened.Mr Tempest said: "We contacted Mr Nadhim Zahawi, the Parliamentary Under-Secretary of State responsible for Covid Vaccinations, and he advised that the Government acted on the advice of the scientists."So, we contacted the scientists, notably, Professor Anthony Harnden, Vice Chair of the JCVI, and he was most helpful in providing information and reference points for our consideration."The JCVI said there was a “unique opportunity” to offer the vaccine to the thousands of people housed in emergency accommodation.It added that they should also be offered the vaccine without the need for an NHS number or GP registration, and that it “will be easier to deploy to this group of people".Mr Hancock said last week: “Our vaccination rollout is moving at an incredible speed, with two in every five adults now having received at least one vaccine.“It’s so important that nobody gets left behind in this national effort.“We know there are heightened risks for those who sleep rough and today I have accepted the advice of the independent experts at the JCVI to prioritise those experiencing rough-sleeping or homelessness for vaccination alongside priority group six.”Mr Tempest said: "We are delighted and applaud the decision taken by the Government to prioritise the homeless and rough sleepers and ensure they are vaccinated as soon as possible."We will do all we can to encourage a high take-up of vaccinations."Thanks should also be extended to Philip Davies MP, who has been most helpful and encouraging in helping achieve this most satisfactory conclusion." ...

Sorry, but we won’t!Like other organisations which provide food for the public, we are regulated by the Food Standards Agency and Environmental Health Department of Bradford Council. Our premises are regularly inspected to ensure cleanliness and adherence to basic rules. Our personnel are also trained to the standards expected so when people eat our food they can be sure we’ve done everything we can to ensure it’s a pleasurable experience – both during the eating and afterwards! Basically, this means we won’t accept food which has been over-produced – sometimes by well-meaning members of the public who, on realising they’ve provided too much for their immediate needs, are naturally not wanting it to go to waste and therefore, perhaps understandably, ring round many voluntary organisations in the hope that they will take the excess food and distribute it.Some organisations might; but we won’t.We don’t like waste, but, having been Finalists in the BBC sponsored British Food & Farming Awards in 2006, we know our reputation is on the line every time we open the kitchen door. Those we meet on our Soup Runs have also come to expect [and enjoy] a nutritious and healthy meal and we all work hard to make sure our standards are high.So, lecture over! And I hope you understand our stance in this matter. ...
View on Facebook
· Share

Thanks to @Morrisons for their very kind donation of Easter Eggs to the Soup Run. They'll be very much appreciated!

“Sometimes history judges you for your actions" @HomelessVC founder @ChauhanZahid has hailed news that homeless people in England will now get priority access to a Covid-19 vaccine https://bit.ly/2OnuIq3

Update on prioritisation of the homeless for vaccinations - press release from John Tempest at http://www.thebradfordsouprun.org.uk/index.php/2021/03/14/homeless-to-be-prioritised-with-vaccinations/

Hi all. This is our new Twitter feed. If you followed our old one, please follow this one instead (or as well!)